3D Microbatteries Are Coming to a Device Near You 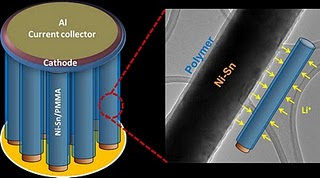 Extending the life of a battery (typically Li-ion) can significantly impact the performance of everything from smart phones and laptops to internal medical devices and hybrid vehicles. The new frontier in battery science is being spearheaded by engineers with something called a 3D microbattery.

Engineering researchers at Rice University are developing 3D microbatteries that charge faster and can hold more power than conventional batteries. The batteries feature a vertical array of nickel-tin nanowires encased in PMMA (PolyMethyl MethAcrylate, commonly known as Plexiglas). The single nanowires are coated in a smooth layer of PMMA-based gel, which insulates the wires from the counter electrode and allows ions to pass through. The goal in a high performance battery is to close the gap as much as possible, which allows the electrochemistry to react with maximum efficiently.

The research team has spent over a year perfecting the nanowire coating technique. The goal is to build these batteries by starting at the nonoscale level. Increasing the height of the nanowires, means more energy can be stored while maintaining the lithium ion diffusion distance. So far, researchers have grown "acres" of coated nanowires with millions covering a chip the size of a dime. This level of scaling greatly expands the surface area--compared to conventional film batteries--to greatly boost power output.

Professor Bruce Dunn at UCLA has conducted some interesting research into 3D microbatteries (particularly Zn-air systems) and bio-fuel cells. For his perspective, check out this video: