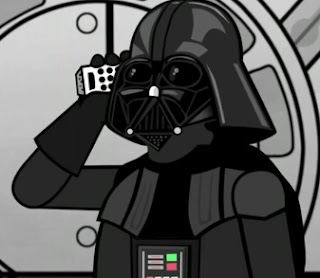 What if Darth Vader was your boss? It might seem like he is already but aside from his overly aggressive force tactics he might be a good candidate for a leadership role in your company according to recent research by the University of Nebraska – Lincoln (UNL).

For over 3 years researchers in the College of Business Administration studied 900 officer cadets at West Point. Instead of just focusing on positive leadership attributes like extraversion, emotional stability and conscientiousness, the study considered “dark side” traits. Technically these don’t have anything to do with Star Wars but Darth Vader fits the bill more than one.

Peter Harms, the study’s lead author, describes some of the subclinical traits as The Evil Eight:

All of these are derived from what he calls the “Dark Triad” Narcissism, Machiavellianism, Psychopathy. The study at West Point concluded that several of these traits, particularly ones dealing with narcissism like being overly dramatic, being critical of others and being extremely focused on complying with rules were actually beneficial to them as they developed their leadership abilities.

Like anything in life though, moderation is the key. An overabundance of any of these traits can tip the scales from quirky to pathological. “By themselves, these subclinical traits had fairly small effects, but when aggregated, they played a substantial role in determining which cadets developed leadership skills,” Harms said. “Assumptions about how these traits affected performance and development were mistaken … it appears that even negative characteristics can be adaptive in particular settings or job roles.”

While the study was set in a specific context of Military training it’s not a stretch to see how some of these traits could be used for the good of the company.

“Organizations should take these ‘dark side’ traits into account when making decisions concerning training and promotion,” Harms said.

If you are interested in a better career in customer service visit http://www.customerservicejobs.com/

By Heather Fairchild - Heather is a multimedia developer, business owner and work-from-home mom.