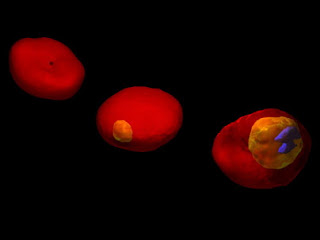 Engineers have recently begun to understand the cellular and molecular basis of such diseases as malaria, hereditary blood diseases and cancer.

New discoveries that reveal a connection between nanomechanics and malaria, for example, have shaped emerging fields at the intersection of traditional disciplines.

The goal is to explore the mechanisms of human infectious disease, and to develop new technologies for diagnostics and therapeutics. Engineers are trying to understand how the malaria parasite alters both the stiffness and stickiness of red blood cells, which prevents the cells from delivering oxygen to tissues throughout the body.

Malaria infects about 400 million people worldwide annually, and kills between 1 million and 3 million. Once malaria parasites enter the bloodstream, they reproduce in the liver for several days, then enter red blood cells, where they undergo a 48-hour life cycle. At the end of each cycle, more parasites are released to infect additional blood cells. The parasite eventually cause red blood cells to become up to 100 times stiffer than healthy red blood cells, which can prevent the cells from flowing through tiny capillaries. Infected red blood cells tend to stick to one another and to the walls of blood vessels, making them clump together.

Combined, these two biomechanical changes can starve tissues of much need oxygen, leading to such common malaria symptoms as anemia, headache, muscular fatigue, and ultimately kidney failure or death.

Studies also reveal that malaria infection causes red blood cell membranes to lose their ability to vibrate. The vibrations, measured in billionths of a meter and occurring in microseconds, reflect a cell’s health.

These types of studies would be impossible without the development of "optical tweezers," microfluidics and technologies and microscopy techniques that were unavailable ten years ago. Interdisciplinary studies that embrace genetics, nanotechnology, microfluidics and computational engineering may ulimately lead to cures based on cellular engineering.