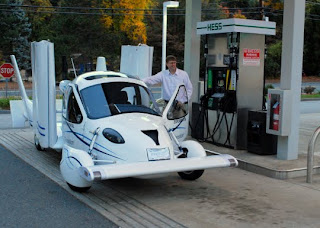 If you're old enough to remember the animated sit-com, The Jetsons, you'll be delighted to learn that flying cars are just around the corner. Terrafugia, a company based in Woburn, Mass., will introduce its car-plane, the Transition, in 2011.

Equipped with wings that unfold for flying, the Transition will need a runway for takeoffs and landings, so you can't just take off from your garage. The plane has been designed to fly under a 10,000-foot ceiling and can carry up to 1,410 pounds (passengers, luggage and fuel).

Until production numbers go up, the Transition will set you back $194,000 for the basic model. If you can afford that, you may also want to add such accessories as a communications radio, transponder and full-plane parachute (at least you won't have to pull a rip-cord). Terrafugia already has orders for nearly 100 vehicles.

Founded in 2006 by five MIT grad students who were also pilots, Terrafugia is aptly named, for the term in Latin means "escape from the land." The company is working closely with the FAA and the National Highway Traffic Safety Administration to meet aircraft and highway safety regulations.

The Transition is the ideal vehicle for commuting to and from the airport. You can learn to operate and fly the Transition in as little as 20 hours of flight time. If you're already a pilot, adapting to the flight controls is pretty effortless.

If you're an engineer or planning to be one, you might consider taking some aeronautics classes to prepare for work in the flying car industry.

For an additional perspective, check out the video, The Terrafugia Transition