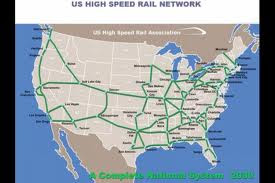 On June 5th 2009, President Obama claimed he's a student of history. Yet he still called for public-private partnerships to develop national high-speed rail. In American history, there were public-private logistics' partnerships between the government and entrepreneurs that built projects like the transcontinental railroad started under President Lincoln. Lincoln liked projects like this because he was a Whig at heart, and Whigs liked public works projects. They also liked bankrupting people.

The Whigs, an early American political party, spent public money on internal improvements as they were called; the shovel ready projects of the day. Unfortunately, the money would then be shut off in times of economic hardship. This meant, of course, half-finished roads, bridges and canals. And lots of people who had made business decisions based on the half-finished roads, bridges and canals went bankrupt.

Internal improvement projects like the transcontinental railroad were, of course, good for America. ( This doesn't mean high-speed rail is). The transcontinental railroad linked America from sea to sea. Along the railroad, telegraph lines sprung up because the railroads needed fast communications, leading to the development of a modern communication's network. This led to jobs for repairing communication's infrastructures because ready transportation was now available. It also lead to more train service as cities became the hubs of connecting railroads. And the original investors went bankrupt. Oh, the people who bought the railroads for a nickle on the dollar became tycoons. And there was no government bailout.