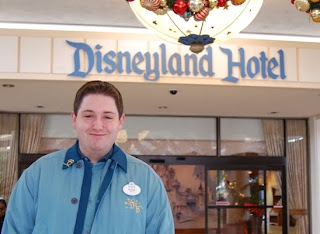 Disneyland Resorts may be the happiest place on earth for hospitality workers looking for a promising career. Many who start as summer interns have worked their way up from theme park guide to hotel desk clerk to supervisor.

Most hospitality jobs are seasonal or entry-level posts where college students earn money for their next semester. Turnover rates are high and wages are low. But many observers agree that the hospitality industry offers a clear road to advancement for those who are motivated to succeed.

Pilar Hamil, the daughter of a Mexican businessman, got her start as a Disneyland VIP tour guide while working her way through college. After graduating, she was accepted into Disneyland Hotel's management training program. After that, she was promoted to front desk manager, then to front office manager at Disney's Grand Californian Hotel & Spa. She now heads up the 15-story Paradise Pier Hotel.

Hamil's case isn't unique. Cesar Ritz, the son of a farmer began as a waiter and ultimately became the force behind Ritz-Carlton hotels. Best Western chief David Kong started as a busboy and dishwasher at the Hilton in Waikiki. Wyndham Hotel president, Eric Danziger started as a bellboy at 17 in San Francisco's Fairmont Hotel.

Those who have the drive and passion to succeed will do so. And it helps to love your job. Hamil puts in 11-hour days that include conducting staff meetings, preparing revenue and expense reports, talking to workers and spot-checking rooms. Occasionally, she'll pop into an elevator and ask guests what they think.

For an added perspective on Disney's International College Program, check out this video: