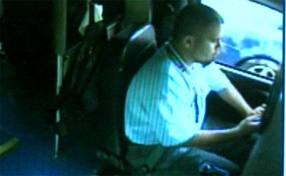 I think it safe to say that most everyone is aware of the increase of auto accidents due to people playing with their phone, texting, reading email, etc. I see cars all the time that are obviously moving slower than surrounding traffic, and as I pass by them and look over, there they are, either on their phone or looking down and up, down and up, reading or texting on their phone. But honestly I had never given much thought to a bigger issue - that of a truckers or bus drivers, or any of the larger vehicles texting while driving. For those of you in the field of logistics and transportation, driving the large rigs is a task in itself, but add to the mix a cell phone and/or texting, and the risk becomes a much larger problem.

U.S. Transportation Secretary Ray LaHood announced back in January that there is now a new federal guideline that bans texting for commercial truck and bus drivers. He stated, "We want the drivers of big rigs and buses and those who share the roads with them to be safe. This is an important safety step, and we will be taking more to eliminate the threat of distracted driving." One of LaHood's main areas of focus since he took the office last year has been to really look at dealing with the issue of distracted drivers.

While details on how this guideline will be enforced were not specifically addressed, there has been support to the measure. The Federal Motor Carrier Safety Administration has reported that on average, drivers take their eyes off of the road 4.6 out of every 6 seconds while they are texting. This increases the likelihood of getting into an accident while texting by 20% over those not distracted. Just using a handheld device while driving is reported to increase accidents by four times over those not using devices.

Over nineteen states have actually already banned texting while driving, with more than six of them actually banning the use of handheld devices while driving altogether. Federal employees in general are banned from texting while operating any government owned vehicle.

The National Highway Traffic Safety Administration reports that in 2008, almost six thousand people were killed, and over five hundred thousand were injured in accidents involving a distracted driver. So, if you land that position in logistics and transportation, as a larger vehicle driver, it is more important to stay focused, since your vehicle is most likely a larger projectile than a normal sized vehicle.

Jeff McCormack resides in Virginia Beach, VA. where he works as a web designer by day. In his off time he is a husband, father, mail order book store manager, and musician. Aside from being a freelance writer for this Logistics Jobsite blog, he also seeks to assist in career choices and information by contributing to other Nexxt blog sites.