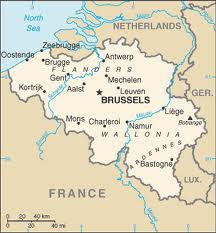 On Dec 16th 1944, the Germans launched what became known as “ The Battle of The Bulge” from the shape of the front lines in the offensive. The attack was launched in the Ardennes' Forest and was the largest and bloodiest battle in American history. The Ardennes had been called the Ghost Front because it saw little fighting and often was covered in a haunted mist. The Ardennes was a U.S. Army refitting area and thinly manned because the Americans thought the Ardennes were impassable in winter.

Hitler thought it the perfect place to attack because he had attacked through there in the spring of 1940, destroying the British and French armies facing him. His idea in 1944 was the same as then, with the added dimension of capturing Antwerp, the main port for the Allies.

If Hitler could capture Antwerp, Allied supplies would have to travel hundreds of miles to the front, with the British in the north cut off from any port. Though the Allied navies and air forces were immense, the nightmare of supplying a huge army group by air and sea with no port, Hitler hoped, might cause the British army to be withdrawn. Hitler then felt he could broker a negotiated peace with the Western Allies and swing his still considerable might against the Soviets alone to the east.

Hitler's generals opposed the plan. The Allies had overwhelming air superiority; destroying any enemy that left dug in positions to use the roads. Also, Germany was facing crippling fuel shortages because of attacks to oil refineries. Too were logistics' problems of bad roads and small bridges. It wasn't that tanks couldn't pass on the roads, but their treads would tear up roads making it impossible for the supply columns to follow, especially since only 1/3rd of the German Army was mechanized. Most supplies were brought to the front using horses.

Hitler was unmoved. He'd kept old U boats in the North Atlantic for foul weather reports to time the attack when bad weather would ground Allied planes. For fuel he'd rely on captured gasoline. For the needed troops and material, he had starved older units of supplies and the latest weapons, creating new units, using old men and boys for manpower. All this he did in secret until a devastating first day's attack.

Doom awaited him; however. Though the Germans had the advantage in the beginning, the Americans were not the cowardly gangsters the German's thought. From the 101st airborne in Bastogne, to American units which fought until they were literally throwing rocks because their ammunition had run out, surrounded American units ground the Germans to a stand still until General Patton relieved them in a logistic's triumph from the south

Interestingly, before the battle, the Germans thought the Americans, who were 75% of Allied armies, were winning because they were cheating, as if possible in war. If the Germans were winning in a pitched battle, massive Allied air power would strike to defeat them. If the Germans had an American unit surrounded, the Americans would expend ridiculous amounts of artillery to save that unit. Most frustrating was after long days fighting with an American army, the Germans would find themselves facing new units as combat weary American divisions were withdrawn and replaced with fresh troops; something resource low and battered Germany couldn't do.

It was Germany's last gasp. Morale plummeted. Germans realized they faced a foe, not just wonderfully supplied, but an enemy which even without material advantages and surrounded would fight. The Nazi's end came soon as Germany's last reserve strength was destroyed in the battle.

Jeffrey Ruzicka is a retired executive for a small company that specializes in industrial water treatment for generating stations and water treatment plants. He lives with his wife in Western Pennsylvania and is a contributing writer to LogisticsJobSite.com and Nexxt. You can read more of his blogs on Logisticsjobsite blogs.