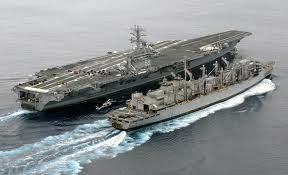 One of the most intricate and dynamic logistics operations in war and peace for military ships is the re-supply at sea, or ship to ship transfer, STS as it is called. During World War II, the United States supplied warships while they were on the move so that they never had to sit stationary thus becoming more vulnerable to enemy torpedoes. The fleet trains as they were called had over 1000 ships in them.

Eventually, but too late, the Japaneses figured out that the supply ships were more valuable targets than the warships. You can't shoot a 16 inch gun without 16 inch shells. And a crew without food or water can not fight.

The days of the 1000 ship fleet trains are in the past now, of course, but the United States Navy still uses techniques perfected during World War II to re-supply its ships. The task is done today by Military Sea lift Command.

They are mostly civilians preforming a valuable job for America. The warship and the cargo ship will pull side by side, both running straight and at the same speed. Weather forecast have already been obtained. Radio contact has been established between the ships, and the crews of the ships are informed that the transfer is taking place.

A cable is thrown across the ships and made secure in some case so the cargo can be brought across. In other cases the cargo ships today use cranes which can lift cargo from the cargo ship to the warship. Also, cargo is moved using helicopters in the case of large cargo ships with heliports for supply transfer to aircraft carriers.

The kind of ships in Military Sea lift Command are varied and the operations used depend upon the ships involved. One of the most important of the operations done in the case of all ships which rely on non-nuclear fuel is petroleum re-supply at sea which is done by attaching a hose from the cargo ship to the fuel storage tank on the warship.

It is, of course, more dangerous to re-supply at sea, especially if the ship is moving. Preferably a ship's captain would prefer to re-supply in a port, but this can be deadly too. Because of cost cutting recommendations made by then Vice-President Al Gore, President Clinton reduced the capability of the U.S. Navy to re-supply at sea which is the reason the U.S.S. Cole was in port when it was attacked by terrorists using an explosive laden craft during the last year in office for Bill Clinton. 17 sailors died and 39 were injured.

This profession can be learned by those willing. From Mooring Masters to Environmental Safety Officers to recruits there are opportunities in both military and commercial ship resupply. To examine these opportunities, you can visit this link www.logisticsjobsite.com.

Jeffrey Ruzicka is a retired executive of a small company that specializes in industrial water treatment. He lives happily with his wife in Western Pennsylvania and is a contributing writer to LogisticsJobSite,LogisticsJobSiteBlog and Nexxt.