Most Advanced Humanoid Robot Ever 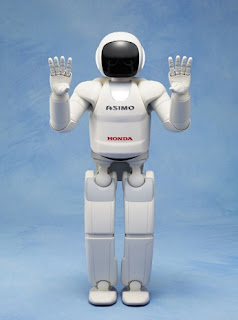 by Alex A. Kecskes
Robots that actually mimic human behavior--running, jogging, listening and talking--are becoming a reality. If you’re looking for a challenging career in engineering, robotics will be taking off in this decade.
Leading the charge is Honda's backpack-wearing Asimo robot. Watching the little guy go through his paces, you’d swear there was a human inside. But open Asimo up and he’s all servos, computer chips and gears.
Several years in the making, Asimo is now smaller, lighter, smarter and faster than his early prototypes. The endearing little C3PO imitator can now walk over uneven surfaces, listen and speak with iPhone Sirius-like voice recognition technology and even pour wine into a paper cup without spilling a drop.
Developed by Honda, Asimo is now 13.2 pounds lighter and can move at nearly 6 miles per hour—a marked boost from the sluggish 3.73 miles per hour of earlier models. The agile new robot can even hop on one foot and dance a jig. In fact, some of the robot's technology was used to develop a robotic arm to assist with Japan’s nuclear crisis.
Asimo is also a smart little guy with anticipatory motion sense. Upgraded behavior control technology means he can make decisions without human intervention. External recognition technology and onboard visual and auditory sensors allow Asimo to predict human movements and automatically recognize voices or gestures. Honda predicts that Asimo could soon be integrated into social environments like homes and care centers for the aged. See more on the Asimo website.
For an added perspective, check out this video:
Got any thoughts on advanced robots or robotic engineering? Include them in the comments section below.
Alex A. Kecskes has written hundreds of published articles on health/fitness, "green" issues, TV/film entertainment, restaurant reviews and many other topics. As a former Andy/Belding/One Show ad agency copywriter, he also writes web content, ads, brochures, sales letters, mailers and scripts for national B2B and B2C clients. Please see more of his blogs and view additional job postings on Nexxt.