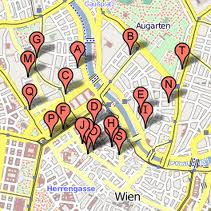 Competition is fierce in the hotel industry as was recently underscored by the opening of the new 5-star Sofitel Vienna Stephansdom. Designed by French architect Jean Nouvel, who noted that he endeavored to "create a dialogue with this historical city," the new Sofitel is packed with a wish-list of amenities—including an art gallery.

The luxury 180-story resort, located on the Danube Canal in Vienna-Leopoldstadt, features 182 rooms priced between 250 and 3,000 Euros per night.

In designing the hotel room interiors, Nouvel created three different schemes for the Sofitel’s rooms, which expressed white, grey or black motifs. Offering a panoramic view across the city is the hotel's "Le Loft" restaurant, whose epicurean delights will be orchestrated by award-winning French chef Antoine Westermann.

The opening comes on the heels of industry representatives' concerns over mounting competition produced too many new hotels. Hotel managers fear they would soon be forced to slash prices as 14 new hotels are planned in the city.

The new resorts will increase the number of hotel rooms in Vienna by 4,500 to 31,200. While overnight stays have risen, the occupancy rate of hotels in the Austrian capital has fallen in past years as travelers and business partners felt the effects of the global economic crisis. Vienna hotels registered 969,000 overnight stays in October 2010, up by 3.7 per cent compared to 2009 stays.

For an added perspective, check out this video: