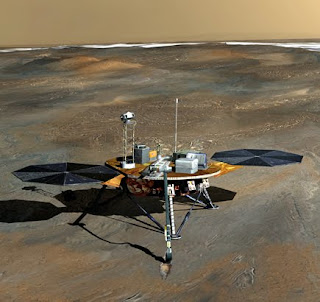 Future engineer-colonists looking to extract oxygen, nutrients and minerals on the moon or Mars may be able to use a Rod-Shaped Bacterium to do their "digging."

Called on to help engineers "live off the land" in space, these cyanobacteria microbes could extract calcium, iron, potassium, magnesium, nickel, sodium, zinc and copper from rocks.

Scientists found that some extreme-loving cyanobacteria could survive 28 days under the very low temperatures and pressures found on Martian landscapes--as long as they were shielded against the sun's ultraviolet rays. The rugged cyanobacteria could also tolerate 28 days of extreme dryness, which means they could possibly be freeze-dried for easy transport and storage.

The advantages of using microbes for bio-mining stack up fast. Microbes catalyze the extraction process at much faster rates than pure chemicals. Using purely chemical systems would also consume a lot of energy, which early engineers would want to preserve when building on a lunar or Martian surface. While plants could be used to generate oxygen, microbes grow much faster, and they can generate far more oxygen with a simpler growing process.

Scientists admit that engineers will find it difficult to colonize either the moon or Mars without development of cyanobacterial biotechnologies. Other processes could be use to dissolve lunar soil and rock with special chemicals, but delivering such compounds to the moon or Mars is prohibitively expensive. Vials of microbes, on the other hand, are far more economical, and new microbes could be engineered that are even more "skilled" at bio-mining.

On a personal note, I hope engineers use safeguards when developing these new microbes. We wouldn't want a Grey Goo Scenario or the microbes mutating as they did in Andromeda Strain.

For more information on Engineer jobs, check out:
http://www.engineer-jobsblog.com/