So Occupy Yourself Productively 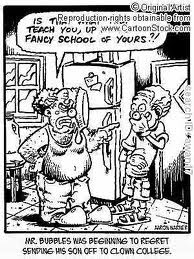 The Occupy Wall Street movement or OWS is noisy about the high cost of student loans which most financial job workers and seekers can relate to. Yet, there's more to the problem which goes unreported as to the cause.

First, why is college so expensive? The answer; a college degree's often a ticket to a good life and there’s competition for the spots available to get in. Supply and demand.

Too, good professors expect to be paid well, as do the book publishers for text books and the maintenance and hospital staffs of schools. But the problem with school costs is caused by something way beyond this. It was caused by the solution used so poor people could attend college, student loans.

Think about it. Why do costs for university schooling go up well beyond inflation rates yearly? Are pens and pencils so rare that they have become as gold? Is paper now like a product in an end of the world movie which only the warlord can own because of its pricelessness?

The truth is that with the advent of student loans, the whole relationship of costs changed. It used to be that a poor student could work and strive for a college degree by sweat and struggle. It was hard, but it weeded out those who just kind of wanted a degree and opposed to those that wanted a degree the same as oxygen. It might have been “unfair,” but life’s unfair or we’d all have lobster and steak for supper.

If the loans were eliminated, the law of economics would make school affordable again. Cost would have to come way down. After all; teachers can’t eat if no one shows up at college which would happen if you had the present costs with no loans. (The same is true with healthcare. Hospital administrators can’t eat rocks if the patients which pay their salaries didn't showed up because they couldn’t afford $60 aspirins at the hospital).

This will never happen though because no politician is going to cancel student loans, especially since most schools don’t teach critical thinking anymore, so no electorate would understand the logic of this. So, how do you lower your school costs then?

First, shop around. There are less expensive schools, especially community colleges to start. A degree at a cheaper school is better than no degree. Commuting saves a lot of money too.

Second, study in high school and get the grades, learning beyond what's needed so you qualify for merit scholarships certain schools offer. This may take lots of research. Also, learning the piano; for instance, may really pay off too as there are scholarships offered for certain musical talents.

Third, work in a way that will not affect your grants and loans at the school, perhaps under a federal school work program. If there are no jobs but you qualify for employment under a federal work study program, ask a professor or the cafeteria to create a job for you. The government pays your salary so they may be willing to do so.

Fourth, a Ugandan electrician makes $2 a month. America is not a land of doom and gloom. If you have loans, live on the loans and save money from work to pay them off in the present.

Finally, the military pays for school with generous programs. Remember we are at war though.

So occupy yourself productively. No protestor at an occupy movement will be rewarded by the powers that run them with anything.

If you are looking for a job, join our sites, it's free. Just fill out an easy on-line membership. You'll even get e-mail job alerts once you're a member.