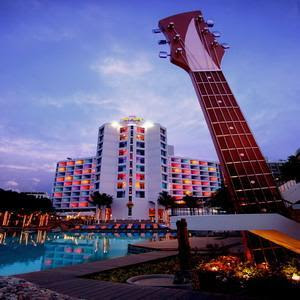 A 40-year-old consumer brand best known for its 130-plus music-themed restaurants, Hard Rock has become a savvy hotel presence, growing from 12 properties worldwide to 45 in the next 10 years.

Exploiting its internationally recognized brand, the chain will open a 1,200-room all-inclusive Hard Rock Hotel in Punta Cana, Dominican Republic. Other Hard Rock Hotels will open in 2012 in Panama and Hungary, and in 2013 in Dubai and Abu Dhabi.

Plans are in the works to expand hotel growth in several markets and through a variety of strategies, including management, licensing, leasing and partnerships with equity providers. The goal is to achieve a hotel presence in the gateway cities of the world. And that must include New York, Washington, Miami and San Francisco, as well as London, Hong Kong, Tokyo, Beijing or Shanghai and Sydney.

Hard Rock's growth plans will be tempered by acknowledging the importance of developing properties in the right locations. That means creating designs and facilities that cater to its target market--late boomers who grew up with classic rock and roll. These people regarded music as a reflection of who they were. To them, the Eagles and bands like them became a source of their identity, something that defines them to this day. Needless to say, Hard Rock will be opening projects in markets with strong ties to the music culture and its history--places like New Orleans, Nashville, Austin and Cleveland.

Check out this video on Hard Rock's Hotel & Casino "The Joint." If you have plans to work in the hospitality industry, this would be a fun place to spend 8 to 10 hours a day.

I attended a number of entertainment press junkets at the Hard Rock in San Diego. See my review of that hotel on Yelp.

For more information on hospitality jobs, check out:
http://www.hospitalityjobsiteblog.com/