The Mysteries of Engineer Nikola Tesla 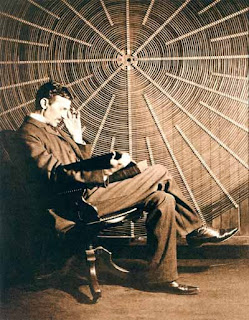 Inventor, electro-mechanical engineer, recluse, Nikola Tesla was an important contributor to the birth of commercial electricity. Best known for his many revolutionary developments in electromagnetism in the late 19th and early 20th centuries, Tesla left a treasure trove of controversial writings, musings and theories that have now become legend.

After his death in 1943, Tesla's many large boxes of private journals and unpatented inventions were locked and sealed in warehouses by the Custodian of Alien Properties. Soon after his death, officials from Wright-Patterson Air Force Base rushed to the warehouses and confiscated Tesla's documents and other materials--all of which were classified at the highest level.

In the last decade, some of Tesla's lost journals have been uncovered, and a number of his "secret inventions'' have been privately developed. One of these inventions is Tesla's Purple Harmony Generator aka Tesla's Purple Energy Plate. The plates are supposedly "in tune" with the basic energy of the universe, functioning as transceivers. They are said to create a field of energy around themselves that will penetrate any material substance. This occurs when original atoms of the anodized aluminum structures are restructured by altering the vibrational frequency of the atoms and electrons.

Non-approved FDA testing reveals that the plates can accelerate the healing process for burns and bone fractures. Aches and pains are said to vanish, sleep is more sound and even water and food become tastier.

Other inventions remain locked in secrecy. (Shades of area 51 or Warehouse 13?)