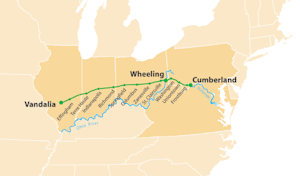 Most Americans, if they think of the subject at all, probably think of Federally funded highways criss-crossing the nation as a 20th century invention, one of those Big Government intrusions that transformed the country into a homogenized bypass. (As commentator Charles Osgood once put it, "Thanks to the Interstate Highway System, it is now possible to travel from coast to coast without seeing anything.")
But the Interstates are also vital corridors of commerce that have transformed not just the roadside landscape but also the business of delivering goods, making modern logistics and thousands of jobs in transportation possible. They are also the largest link in a chain of Federal transportation projects that stretch back to this month 200 years ago, when ground was broken at Cumberland, Maryland, on May 8, 1811, for the first national highway - the National Road.
In fact, road building was one of the original powers the Constitution granted our national government, via the section that gives Congress authority "to establish Post Offices and Post Roads." It was to facilitate the delivery of mail and to promote settlement of land west of the Appalachian mountain chain that Congress authorized the construction of the National Road in 1806. The initial segment, completed in 1818, connected Cumberland, the end of navigation on the Potomac River, with Wheeling, Virginia (now West Virginia), on the Ohio River. Mail carriages began using the new road - the first to be built with an all-weather macadam surface - as soon as it was completed. Two years later, Congress authorized its extension to the Mississippi River at St. Louis, and in 1825 approved a further extension to Jefferson City, Mo.
The National Road would never reach St. Louis. By 1839, when the road reached the Illinois state capital at Vandalia, railroads had begun to spread across the land, offering faster and smoother travel, and Congress voted in 1840 to halt further work on the National Road. By then, some segments of the road, including the original Cumberland-Wheeling portion, had been transferred to the states, which converted them into turnpikes. Nonetheless, the National Road remained a popular route for travel from the East to the nation's interior, and by the Civil War, the original vision was realized via turnpikes that connected the road to Baltimore, Washington and St. Louis.
When the nation turned its attention again to improving its highways in the first years of the 20th century, the 620-mile-long National Road was there, somewhat the worse for wear. Its route was incorporated into the National Old Trails Road, a marked route that was to extend from New York to San Francisco. Then, in the 1920s, the Federal government and the states began work on a national system of numbered highways, and the National Road became part of the central transcontinental route, U.S. Highway 40.
Today, truckers and motorists in a hurry to get from Washington to the Heartland use Interstate 70, which has supplanted U.S. 40 as a main artery of commerce. In Maryland, Interstate 68 - the "National Freeway," one of the few Interstates to bear a National Scenic Byway designation - offers a quicker trip through the road's original corridor as well. But despite all this progress, much of the original National Road route remains intact, offering a scenic, relaxing journey back in time for travelers wishing to rediscover America on the road that helped a young nation grow, prosper and expand westward.
By Sandy Smith
Sandy Smith is a veteran freelance writer, editor and public relations professional who lives in Philadelphia. Besides blogging for LogisticsJobSite.com, he has written for numerous publications and websites, would be happy to do your resume, and is himself actively seeking career opportunities on Nexxt. Check out his LinkedIn profile and read his other posts on LogisticsJobSiteBlog.com.