What the Lily Ledbetter Fair Pay Act Means for Women

One of the pieces of legislation that was mentioned during the debate was the Lilly Ledbetter Fair Pay Act of 2009. For those who don't know, this was the first bill that was signed into law by President Obama in January of 2009. The Act extends the reach of the Civil Rights Act and provides added protection for those who have been discriminated against in the workplace. 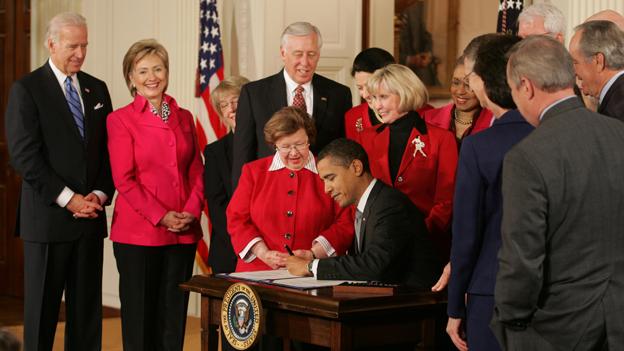 I thought that it was a good time to take a look back and find out more about what this new law does and why.

It's actually a really interesting story. Lilly Ledbetter grew up in the very small town of Possum Trot, Alabama. In 1929, she applied for her dream job at Goodyear Tire and became one of the first female managers to work for the company. She worked there for nineteen years and faced a great deal of discrimination and harassment. Even still, she continued to work there. It wasn't until she received an anonymous letter informing her of the fact that all of the male managers with the company were being paid significantly more than she was that she decided to take action.

Ms. Ledbetter decided to sue Goodyear for gender discrimination. After having her day in court, she won and was awarded a $3 million dollar settlement. Goodyear appealed the decision and eventually the case reached the Supreme Court. After an eight year battle, the Supreme Court ruled against her saying that although she had been discriminated against, she wasn't able to take action because the statute of limitations had run out on her claim. According to the legislation on the books at the time, people only had 180 days after a salary disagreement to sue for discrimination.

Because she wasn't aware of the pay inequality, she wasn't able to take action during the required timeframe. When the Supreme Court Justice Ruth Bader Ginsburg encouraged Lilly to continue to fight back, she took her complaint to Washington. The Fair Pay Act, which was named after her, changed the law and now, every unequal paycheck is considered a new instance of discrimination. This means that an employee would have 180 days from their last paycheck to sue for discrimination.

Although this piece of legislation is still hotly contested, it provides additional protection for women who have been discriminated against in the workplace. Because it's often difficult to find out how much other employees are being paid, many times women aren't aware of how unequal their salaries are. Now, even if the discrimination is hidden, the victims are still able to seek a legal solution.

Lilly Ledbetter lost her case against Goodyear and won't see any of the original $3 million dollar award. In spite of that, she continued to fight and has made a real difference in the lives of other women who are facing similar situations.

What do you think about this new law? Do you think that gender discrimination and pay inequality are real problems in today's workplace? Please share your thoughts in the comments.