RIP Steve Jobs - What We Will Miss

I had planned to write a wonderful article about the iPhone 4s launch and the underwhelming reception it received. It's not that the newest addition to Apple's product line isn't great, it's just that we have grown so accustomed to watching Apple launches and being blown away. The launch didn't seem the same without him selling the product. However, with the passing of Jobs, that just doesn't seem as important any more.

The tech world has been rocked by the passing of one of its greatest heroes. Apple announced the passing of their co-founder and long time CEO Steve Jobs, on October 5th. Although Apple didn't give a cause of death, we can only presume that he lost his battle with pancreatic cancer.

The Apple website, which had been promoting the iPhone 4s, changed to a full page with a picture of Jobs. It's a sad time for both Apple and the world at large. The world has lost an incredible visionary and somehow, it just feels like a sadder place without him in it.

Steve Jobs has long been a personal hero of mine. At 38, I remember seeing this dynamic man on television talking about how personal computers can change the world. The future he saw was shocking to me at the time. As a young girl, I was impressed by how passionate he was about the idea that one day soon, we would all have small computers in our homes. He saw a future where people would use these computers to do everything. Here is a quote from an interview he gave in 1985: 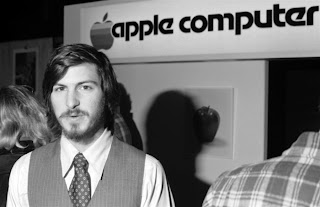 "The most compelling reason for most people to buy a computer for the home will be to link it into a nationwide communications network. We're just in the beginning stages of what will be a truly remarkable breakthrough for most people--as remarkable as the telephone." - Steve Jobs

He was right. The first computer I was really able to work with was the Macintosh. Our school had purchased several of these computers and we all learned how to use them to create amazing posters, type reports and play games. Although there were PCs in our school as well, we used the Macintosh for things like desktop publishing.

Over the next few years, PCs gained market share and the Macintosh was a tool primarily for artists and other graphic professionals. Steve Jobs was fired from the company he helped to create in his parent's garage, and Windows took over the computer landscape. Apple was not quite forgotten, but I assumed that the company was going to go the way of the Beta video cassette.

Then, things changed again. Suddenly, we became aware of what a great computer can do. Jobs' other company, Pixar, showed us how computers can be used to animate full-length feature films. I'm sure that just about anyone can remember how blown away they were when they first saw "Toy Story". Pixar managed to not only animate pixels, but give them emotion, depth and create fully formed characters that captured our hearts. Even today, "Toy Story" is not only an amazing film, but a landmark of what technology can create.

But, he didn't stop there. He regained control of his company and introduced the iMac. In case you don't remember that moment, here is a short video:

When I watch it now, I still think that the iMac is one of the coolest looking computers ever made. I wanted one so bad, and I can recall being so jealous of Elle Woods in "Legally Blonde" when she bought the orange iBook to take to class. The iMacs were sexy, artistic and personal, not to mention being excellent computers. Watching his product pitch now, I am overwhelmed by how great of a salesman he was. Even though the iMac is over a decade old, there is a small part of me that wants to run out an buy one.

From the ground-breaking personal computer,the Macintosh to the iMac and iBook you'd think that would have been enough. But, then he thought that there had to be a better way to buy and enjoy music. Then, there was the iPod. It seems like no big deal these days, but at the time that the first iPod was introduced, the only option for taking music from your computer was to burn it onto a CD. The iPod and iTunes allowed people to buy single songs, manage their music and take it with them anywhere.

After he had taken on the computer industry, changed the way that movies are animated, revolutionized the music business by giving musician a way to sell their music directly to customers and creating a tool to listen to the music, he decided to tackle the cell phone world.

The iPhone was the most revolutionary smart phone created. Even today, it is the industry leader and the phone that all others are trying to beat. Apple opened the App store, and introduced the concept of adding customizable apps to your phone. This idea quickly caught on, and almost any smart phone these days has some version of apps.

Still not done, Jobs saw a new market. He wanted to create a device that would fill the gap between the smart phone and computer. He saw a need that wasn't being met and tried to think of what was needed to fill it. That gap was the inspiration for the iPad. Until the iPad, there wasn't a market for tablets. Now, the tablet market is booming and the iPad 2 is still the reigning champion.

Whether you love Apple products or hate them, you can't deny that they have changed the tech world for the better. Steve Jobs was a visionary and he will be missed. His business ethic will live on, and I hope that Apple will continue to innovate and think ahead.

I'll leave you with one of my favorite Steve Jobs quotes about product innovation:

"It's really hard to design products by focus groups. A lot of times, people don't know what they want until you show it to them."

By Melissa Kennedy- Melissa is a 9 year blog veteran and a freelance writer for TechCareersBlog and Nexxt. Along with helping others find the job of their dreams, she enjoys computer geekery, raising a teenager, supporting her local library, writing about herself in the third person and working on her next novel.

Is Amazon Turning Into A Tech Company?
article posted by Staff Editor