The Social Network- Fact or Fiction? 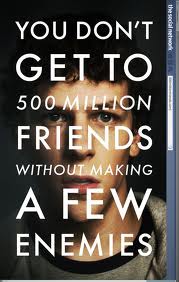 Have you seen The Social Network yet? It is certainly garnering some mixed reviews, and seems to be doing well at the box office. The movie is based on the book “The Accidental Billionaire” by Ben Mezrich. The movie is supposed to be the story of the creation of Facebook. The book, like the movie, seems to be more fiction than anything else. In fact, during the summer of 2009, Janet Maslin, of the New York Times, had this to say about the book and its author:

“He didn’t have a lot of access. He didn’t have a lot of information. Most crucially, he didn’t have Mark Zuckerberg, the former Harvard student who is famed for having cooked up the Facebook algorithms and is at the heart of the Facebook story. ...In “The Accidental Billionaires” he so enthusiastically favors hot air over specifics that he waits until the end of the book to offer up three little words that speak volumes about Mr. Zuckerberg’s ... persona. However shy, vague, withdrawn, affectless and computerlike Mr. Zuckerberg is said by this book to be, he turns out to have business cards that say “I’m CEO — B***h.” That phrase outweighs all 258 pages of Mr. Mezrich’s stalling. ...“The Accidental Billionaires” is so obviously dramatized, and so clearly unreliable, that there’s no mistaking it for a serious document.”

This movie certainly doesn't represent the facts, and is definitely based very loosely on truth. But, it does feed on Hollywood's idea that a bunch of nerdy kids can stumble upon something, do a bit of hacking while wearing casual clothes and accidentally become billionaires. This is just as much of a fairy tale as the rags-to-riches Cinderella stories that are so often a part of romantic comedies.
Internet startup companies start small. Sometimes the office is a living room, a basement, the garage or wherever is the best place to get the partners together. There is no need for corporate clothing, because no one cares what you are wearing. But still, they take a great deal of work and there are millions of choices that have to be made in order to be a success. It is a large part hard work and a lot of luck too. Finding capital, getting investors on board, being able to survive during the times when your company isn't generating any income but you still have to work full time at it, this is hard work. There isn't a successful internet company founder that accidentally became a success.
What is worse is that in both the book and the movie, the question is raised about the ethics involved in the creation of Facebook. It is implied that Zuckerberg did something wrong by pirating the information from Harvard to create his site. And while there may have been some shady ethics, I hardly think that it is any different from writing a book based on mostly fiction. Then selling the movie rights to said book, and marketing them both as non-fiction. There seems to be something inherently wrong with making up a new back story for a real person and a real company, then widely distributing it as fact.
What do you think about the movie? Let me know in the comments.
Are you looking for a job in the Tech field? Take a look at TechCareers.
By Melissa Kennedy- Melissa is a 9 year blog veteran and a freelance writer, along with helping others find the job of their dreams, she enjoys computer geekery, raising a teenager, supporting her local library, writing about herself in the third person and working on her next novel.